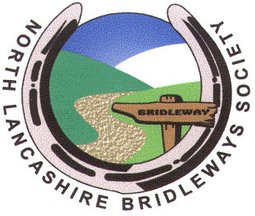 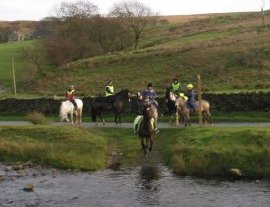 North Lancashire is a beautiful part of the country. The coast, the valleys and the fells make for variable, interesting and often breathtaking riding country. The area includes the Lune Valley and two designated areas of outstanding natural beauty, the Silverdale & Arnside area and the Forest of Bowland.

Important alert to all riders

Anyone who has ridden the Helton to Whale Bridleway no. 305007 before 2004 please get in touch with Pam Critchley (pamcritchley@icloud.com) as we require User Evidence to prove our right to use a perfectly legal bridleway over the ford on the river Lowther, now currently blocked by a fence. She will send out forms to be completed very carefully as it is likely to go to Public Enquiry. Leisure riders only.
Seems a dreadful thing to have to do when it is clearly illegal, but this is the situation.

There are two routes which are not shown as bridleways on OS maps but are accessible and available to be ridden, so we wanted to publicise them. They both involve links to other websites, but these will enable you to see a map!

Horse riders can ride from Glasson Dock along the path of the old railway line towards Lancaster. This part of the route is shown on the link below.

It can also be found by searching for BHS Dobbin Ride Maps. You can ride further along the Millennium Path but there is a bridge near Sainsbury’s which is not suitable for horses and would involve crossing a busy road. However, the path is accessible to horses along the banks of the River Lune up to Bull Beck at Caton (Grid Ref: SD 5442 6511). A good parking place is Bull Beck Car Park, Grid Ref SD 5418 6497.

The Bay Gateway Bridleway was opened in 2016 thanks to NLBS, BHS and members responding to the consultation process.

The 1.2km track is on an embankment on the south side of the easterly end of the Bay Gateway. The track links Halton Road (SD 4937 6469)) to the Green Lane byway (SD 4827 6446) also known as Blackcastle Lane. There is an exit half way along the route on to Kellet Road.

On the OS map the route is shown as a track rather than a bridleway, but horseriders are able to use this track.

The link below shows the Bay Gateway Bridleway as part of a bigger loop.

Free Riding Route maps of permissive routes and rights of way in the Arnside and Silverdale Area of Outstanding Natural Beauty are now available to download.

Download booklet with an overview map and information about the area.

You can find out more about the area here: www.arnsidesilverdaleaonb.org.uk

North Lancs, South Cumbria and around 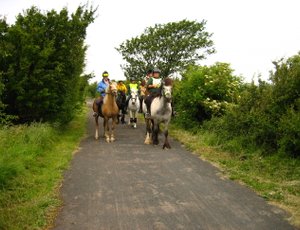 The  members of NLBS have a wealth of knowledge of riding routes, not only in the immediate North Lancs. area, but also in the bordering areas of South Cumbria and the upper Yorkshire Dales. We have compiled a folder containing a collection of several routes which is available to buy at £3.50

Advice on where you can ride on beaches, mainly around Morecambe Bay.

Just north of our main area there are 5 “Eden Valley Loops” which were launched in summer 2010, following years of development by local volunteers and riding groups. The Loops are 135 km of routes designed for horse riders, off road cyclists and walkers based in Cumbria.

The routes are available in a free route guide from the BHS Access Department on 02476 840452 or  access@bhs.org.uk. You can view them online on the BHS site, but the printed guides are much handier.

It is always advisable to check your proposed ride before tackling it with your horse by seeking information from someone who has recent local knowledge of the area e.g. local farmers.

Dunsop Fell in the Forest of Bowland

The land is very boggy even in the summer. NLBS recommends that riders find an alternative route to the bridleways in this area.

North Lancashire Bridleway information leaflet  Please be aware that parts of this route are extremely remote!

It is not advisable, in the view of NLBS, to use the bridleways which actually cross the River Lune.